In the first of a regular new series looking at lending conditions for middle market companies, we take a jargon-free look at the credit markets. We find that the highly competitive loan markets of Q4 2019 are back with a vengeance as banks and non bank lenders look to offload record amounts of capital.

Each analysis will focus on a different lending sector.  This time our focus is: commercial banks 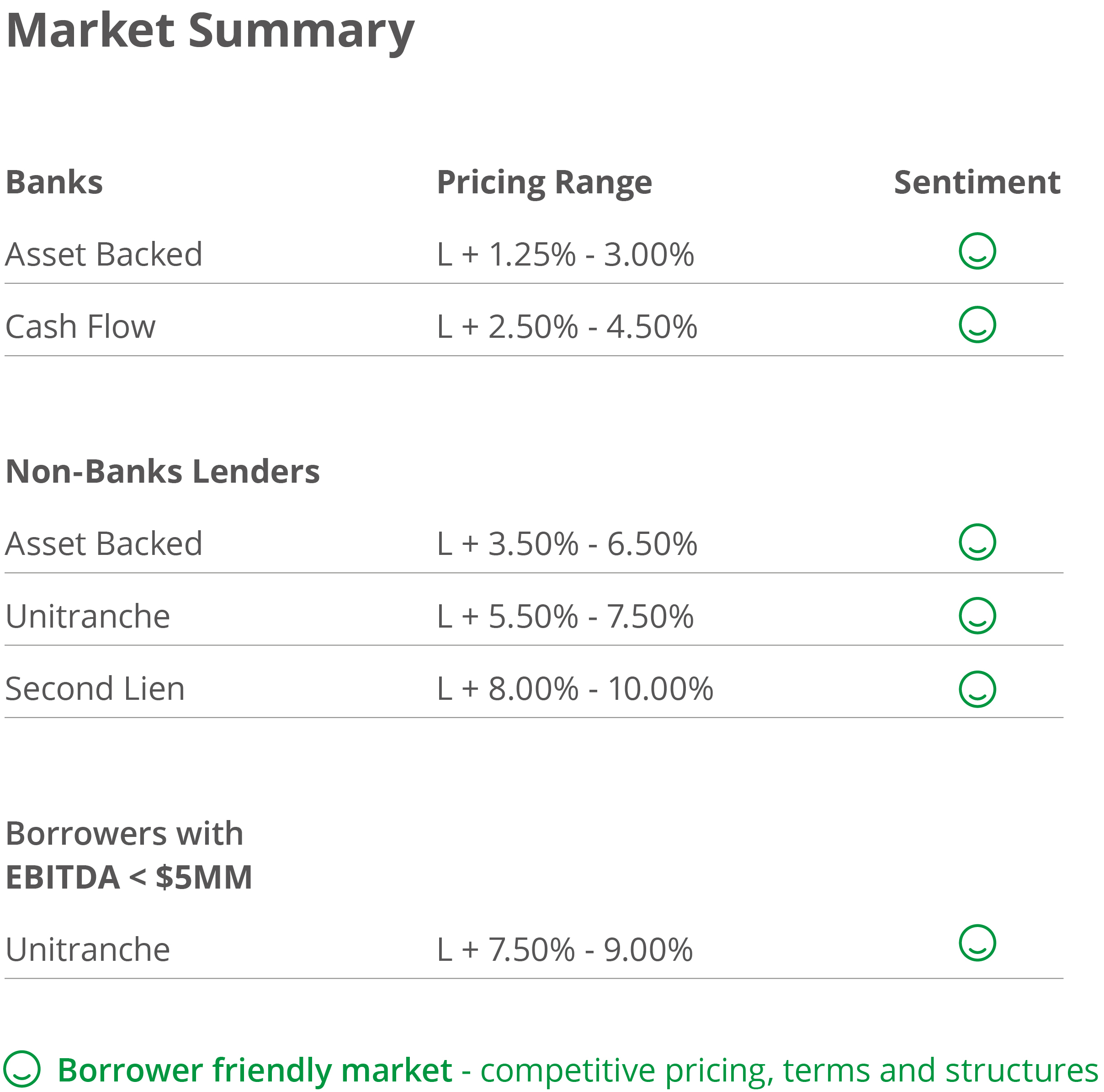 It is as if the pandemic never happened. That’s certainly the view of Bernie Lacayo, head of loan syndications at CIBC Bank USA, the US affiliate of CIBC, a Toronto-based commercial bank. The favorable loan deals for US middle market companies that peaked at the end of 2019 are back, he says. And, in some cases, the terms available now are even more favorable than they were then.

“We are seeing aggressive deals when it comes to both leverage and documentation terms.”

Joe Angel, head of structured finance at First Midwest, agrees. “We saw a very strong fourth quarter in 2020 and the pipeline stayed up in Q1 this year. Lending markets in Q1 2021 were still very aggressive. Companies that were not affected by Covid have been very well received by the markets.”

For many middle market companies, particularly if they search lending markets widely, they have been able to negotiate larger loans, more flexible loan agreements and, in some cases, even lower pricing than the near-record lows reached at the ends of 2020 and 2019.

Prime examples are covenant terms. Bankers say these have become even more flexible in recent months. For smaller middle market companies, First Midwest’s Angel says that cushions on EBITDA covenants have widened over the last quarter from previous levels of between 20-25% to around 25-30% now. For larger companies these are often even higher, he says, giving borrowers even more headroom to miss EBITDA forecasts before incurring a covenant violation.

But it is not just in loan terms that companies are getting better deals. Some companies have also been able to borrow more. Angel, whose bank lends predominantly to smaller middle market companies, says that companies that performed well in 2020 have seen leverage multiples improve this year.

Leverage is a quarter to half a turn higher

“Leverage is a quarter to half a turn higher over EBITDA than over the last couple of quarters. That is a big move for less than six months,” he says.

Many non-bank lenders are also helping drive up these EBITDA multiples, frequently through their debt financings for private equity (PE) led leveraged buyouts. These moves are being driven by record amounts of capital – at banks as well as at non-bank lenders such as private debt funds – looking to find a home.

This is partly because portfolio losses during the pandemic have been less than feared as the US government’s generous Paycheck Protection Program helped companies. Further, banks have seen a dramatic surge in deposits buoyed by substantial US fiscal stimulus and Federal Reserve quantitative easing policies.

This has made lenders particularly aggressive in the less risky asset based loan market, say bankers, where loans are secured by underlying assets such as accounts receivable, inventory or equipment. Here companies have been able to negotiate not just improved terms but also extremely competitive interest rates.

But, when it comes to loan costs, lenders say they have very little room left for maneuver. CIBC’s Lacayo is blunt: “Pricing can’t go any lower. We hit rock bottom in 2020”.

For first lien ABL lines of credit, Lacayo says loan costs were typically 1.25% to 1.75% over Libor in Q1, in line with the highly competitive rates charged at the end of 2020.

However, the availability of credit and the terms and pricing on loans vary widely between companies. Those businesses which had a strong Q4 in 2020, especially the larger companies and ones backed by PE, are being offered better terms and higher leverage multiples, putting them in a strong position to benefit from the fierce competition between lenders, which is increasingly coming from the non-bank lenders.

For many middle market companies looking to finance growth or to refinance existing debt, this is welcome news.

But not all companies are finding lending markets quite so easy

Companies in the hospitality and aviation sectors were particularly badly hit and companies operating in the retail and oil and gas sectors also finding it tough to secure financing. Companies in such hard-hit sectors, along with smaller and non-PE backed companies, would therefore benefit most from shopping around for the best deals.

However, things could start to improve over the coming months as the US economy begins to open up, buoyed by an aggressive vaccination program.

As the US economy recovers (in March the Federal Reserve increased its prediction for US economic growth in 2021 to 6.5%), lenders are expecting more appetite for borrowing from some middle market companies looking to expand through investment or even M&A. Indeed, some privately-owned businesses may look to take dividends or even sell the company before new increases in capital gains taxes take effect. This is precisely what private equity firms, sitting on more than $1.5 trillion of undeployed funds, are hoping for.

In the meantime, searching out the most competitive terms from a wide array of lenders will remain as important as ever. Seeking term sheets from a diverse number of lenders is the best way to secure the most favorable lending agreements tailored to individual company requirements.

And there may not be a better time to do this than now. Some lenders predict that the recent wave of bank consolidation among regulated banks will reduce the availability of loans, potentially negatively impacting current highly competitive lending markets later in the year.

In short, now could be the time to act. Lending terms may not get any better than they are now.

BY VISITING OUR SITE, YOU ARE AGREEING TO THE TERMS OF THIS PRIVACY POLICY AND THE ACCOMPANYING TERMS OF SERVICE www.capx.io/terms, WHICH ARE INCORPORATED HEREIN BY REFERENCE AND MADE A PART HEREOF (COLLECTIVELY, THE “AGREEMENT”). IF YOU DO NOT AGREE TO ANY OF THE TERMS IN THE AGREEMENT, YOU MAY NOT ACCESS OR USE THE SITE. BY SIGNING UP FOR, ACCESSING, AND/OR USING OUR SERVICE, EACH USER IS AGREEING TO THE TERMS OF THE AGREEMENT, AS WELL AS THE SUPPLEMENTAL CP AGREEMENT FOR CAPITAL PROVIDERS AND/OR THE SUPPLEMENTAL CS AGREEMENT FOR CAPITAL SEEKERS, AS APPLICABLE, WHICH SHALL BE PROVIDED DURING THE REGISTRATION PROCESS (COLLECTIVELY, THE “SUPPLEMENTAL AGREEMENTS”).

The Information We Collect and Receive

In the course of operating the Site and the Service, we will collect (and/or receive) the following types of information. You hereby authorize us to collect and/or receive such information.

Sharing of Your Information with Non-Affiliated Third Parties

How We Protect Your Information

We treat the Information we receive as confidential, and only use it and share it as expressly permitted under this Privacy Policy. We take commercially reasonable steps to protect the Information from loss, misuse, and unauthorized access, disclosure, alteration, or destruction. We maintain physical, electronic, and procedural safeguards to guard non-public personal financial information from unauthorized access, use, and disclosure. Please understand, however, that no security system is impenetrable. We cannot guarantee the security of our databases, nor can we guarantee that the Information you supply will not be intercepted while being transmitted to and from us over the Internet.

You may access, review, and make changes to your Personal Information, Business Information, and Transaction Information by following the instructions on your own profile page, or the Business Profile. In addition, you may manage your receipt of marketing and non-transactional communications by clicking on the “unsubscribe” link located on the bottom of any CAPX marketing communication. Registered Users (including Master Users) cannot opt out of receiving transactional e-mails or other communications related to their account. We will use commercially reasonable efforts to process such requests in a timely manner. You should be aware, however, that it is not always possible to completely remove or modify information in our databases.

The Site and our servers are operated in the United States. Please be aware that your Information may be transferred to, processed, maintained, and used on computers, servers, and systems located outside of your state, province, country, or other governmental jurisdiction where the privacy laws may not be as protective as those in your country of origin. If you are located outside the United States and choose to use the Site and/or Service, you do so at your own risk.

In addition, CAPX does not monitor, recognize, or honor any opt-out or do not track mechanisms, including general web browser “Do Not Track” settings and/or signals.

Welcome to CAPX, where we are dedicated to transforming how companies find and get financing. CAPX is not a financial institution, but we have years of experience that has given us powerful insights to make the corporate finance process uniform, efficient and transparent. Please explore our site to find out more about what we do, and feel free to email us at info@capx.io to learn more.

The following Terms of Service apply to your use of the CAPX website (www.capx.io), and also include some general information about the services we offer. Our lawyers insist that we include the terms, so we insisted that they let us know what they actually mean. Fortunately, as the publicly available portions of the site only include general information, this is actually pretty simple.

CAPX is a technology company with a platform that helps connect companies with sources of financing. The site features information about us and our services, and is provided to help inform potential users of the services. Unless you register an account with us and enter into separate terms for the use of our platform, that is the only thing you can use it for – to learn more about us. We own all information on the site and, if you send us any suggestions about the site or service, we can use them however we choose (and what we will choose is to try to make the site and the service better).

If you want to use the service, you will have to register with us, provide certain information about you and your company, and agree to additional terms. While we do our best to keep the site up to date and accurate, we are not responsible for any errors on the site. If you send us any information about yourself (for example, when emailing to learn more about the service), we will only use that information as described in our privacy policy available at www.capx.io/privacy. You are responsible for your use of the site, and, in the unlikely event that you cause us harm in doing so, will “indemnify” us (pay for) any harm we suffer.

CAPX, LLC, d/b/a as CAPX ("CAPX") licenses a proprietary, cloud-based platform that helps connect companies seeking capital (“Capital Seekers”) with financial institutions ("Capital Providers") as further described below (the “Service”). These Terms of Service (the "Terms"), including any Supplemental Agreements (as defined below) applicable to you, are a legally binding agreement between you and CAPX. As used in these Terms, “you” and “your” refer to any user of CAPX's website(s), services or applications at www.capx.io (collectively, the “Site”). "We", "us", and "our" refer to CAPX and our directors, officers, employees, contractors, owners, agents, licensors, or licensees. CAPX IS NOT A BANK OR FINANCIAL INSTITUTION AND DOES NOT PROVIDE INVESTMENT ADVICE OR CONSULTING SERVICES TO USERS OF THE SERVICE. WE ARE SOLELY THE PROVIDER OF THE SERVICE DESCRIBED ON THIS SITE.

Are you Seeking Capital for your business or Providing Capital to others?